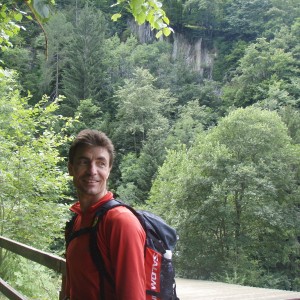 John Theocharopoulos is a Physical Education teacher, mountain guide, trainer and instructor for mountain schools, responsible for the Sports and Recreation Center (TAC).
He was a winner of the Greek Championship in Ski Mountaineering for 15 years (1993-2007) in a row.
His great love for nature shaped his career, which is the following:

He undertakes the education of mountaineering, climbing and ski-mountaineering schools, the organisation of competitions and adventure games, as well as personal training to people who wish to take up mountain sports.
He performs few-hours, daily or multiple-day sports expeditions in nature for enthusiasts of mountain sports.
Sports is a way of life for John.
He is active in many mountain sports, having many years of experience in competitions in Greece and abroad and successive distinctions:
CLIMBING
He has done more than 300 renowned high difficulty climbing routes, over 60,000 meters  in total of climbing routes in Greece and the Alps. From 1993 to 1994 he participated in two World Sports Climbing Championships.
In his climbing activity the following stand out:

For this activity he was honored with an official award from the Hellenic Mountaineering and Climbing Federation.

Participate in more than 150 races.
ADVENTURE RACES
Read about the activity of John Theoharopoulos in mbike magazine.